[This article was originally written in 2013 and has become popular again following the Sunday Times article about life insurance in June 2021. I’ve done an updated version on this article as a podcast – click here to listen.]

Protection insurance is dull, isn’t it?

No one ever wakes up in the morning, claps their hands together excitedly and exclaims that today is the day that they will go about and buy a critical illness policy. They reserve that sort if excitement for cars, shoes and iPads.

It is a pity though that something so potentially important is so dull. Find anyone who has bought a policy and has had to make a claim and you’ll probably find an advocate, especially if the payout saved their family finances. The stories that claimants have to tell are powerful enough to overcome “dull”.

What are your claims stories?

The one that always sticks in my mind involved a little boy wearing a Manchester United football strip.

I was in the office working away on a marketing plan when the assistant claims manager called me.

“There’s a gentleman in reception who wants to see me. And he wants someone in charge from the marketing department as well.” she said.

Isn’t it sad that my first thought was that there was a problem. Had we declined a claim and were we about to face an unhappy customer?

No as it turned out.

We went along to reception and met our customer. He had his son with him. And his son was wearing the full Manchester United football strip. You have to understand that this was not the sort of attire you expect to see in the capital of Scotland so it certainly created a lasting impression.

After leading “Dad” and his son into one of the guest meeting rooms, we sat down and listened to his story.

He explained that about a year earlier his wife had unfortunately been diagnosed with cancer. They put in a claim on their critical illness policy and we had paid out their lump sum of cash very quickly because, unfortunately, she was suffering from a particularly nasty form of cancer. This money cleared their mortgage and gave them a significant amount on top. His wife did not respond to treatment and, sadly, died.

Of course her husband and son were devastated by this tragedy. It tore their lives apart. They would never fulfil their many dreams and potential futures. But after a long period of mourning they began to get their lives back together.

Dad decided to take his son on a long holiday. A father and son road trip. You see the son was a huge football fan hence the Man U strip. They decided that they would visit all the major football grounds in the UK. All of them. Dad was able to take the time off work. They were financially secure because of their critical illness policy payout.

They started their trip down in Exeter and gradually over the weeks zig-zagged their way up the country heading north. Eventually they arrived in Edinburgh.

“And I realised that Edinburgh was where our insurance company head office was, ” Dad explained. “We decided that we wanted to come in here today and to thank you for the money you gave us.”

By now I had a lump in my throat and I could see that my claims manager colleague’s eyes were a little damp.

Dad continued, “There is nothing in this world that can replace my wife.” He put his arm around his little boy’s shoulder. “No one can replace his mother. But what you have done has helped. And we really want to thank you for that.”

I tried to hold back my tears aware that my colleague already had them streaming down her cheeks. But when the little boy in the Man U football strip produced a huge box of chocolates and said, “And we want you to have these,” I couldn’t stop my eyes from welling up.

I’ve never forgotten that gentleman and his son. Their story made me realise what a difference dull protection insurance can make. Their story is one that has committed me to developing and marketing these products for so long.

It’s a shame that we rarely hear such stories in the media. Just for once, wouldn’t it be great to hear a story like this and not the usual Watchdog feature about a declined claim.

Critical illness cover is approaching its UK thirtieth anniversary. More or less every adviser who has ever recommended one must now have their equivalent of the “little boy in the Man U strip” story to tell.

Every one of those stories will be just as powerful because they involve real people, emotion, sadness and perhaps optimistic happiness. Each one has the power to transcend dull, and emphasise how important protection insurance is.

But we need to tell these stories more.

What is your most powerful claims story? Please share it here or leave a link to your story in the comments box below. Perhaps if we collect together a few there might be a potential future ebook we could put together. We can overcome the fact that protection insurance is dull.

Can 3 simple words guide the way to business success?

Why is everything so complicated these days?

Do you think propositions across many industries seem to become ever more complex and difficult to deal with?

Welcome to my new blog and to the Roger Edwards Marketing website. Now that my garden leave from Bright Grey and Scottish Provident is over I’m now in business to help you. So it makes sense for me to blog about the things I know most about – marketing (both strategic, product and promotion and content marketing), social media, copy writing, public speaking and protection insurance.

And so back to all that complexity.

Necessary regulation causes some of it. Bureaucracy gone mad in companies causes most of it . I get really angry when such bureaucracy stifles innovation or prevents companies from doing simple and exciting things. And I’m sure you do too.

Which is why I want to focus on helping people simplify their propositions in future; not just their products, but their marketing as well.

Every week I listen to a podcast by an Canadian marketer called Mitch Joel (check it out it’s called Six Pixels of Separation). It’s very insightful and relevant to marketing across all industries. In his New Year podcast he declared the three words that he will live by in 2013 and the idea appealed to me. – See more at Six Pixels of Separation.

So I thought I would define what three words would be my guiding principles for my marketing business. Here they are:

We should strive to make everything simpler for customers and advisers across propositions, products and processes. Many industries are necessarily complex and I think clients are crying out for less complexity.

Good content is increasingly important for all businesses. It can mean website copy, videos and podcasts on the one hand and booklets, policies and letters on the other. Is your content bringing you customers, and winning you business?

If we are to grow our business we need to experiment with new ideas. This might mean putting a special price into a segment of the market, or piloting a new proposition before mass roll out. The key to experimentation is to learn and grow with each initiative.

I believe that in an increasingly complex and bureaucratic world success means we must simplify our propositions and messages, create amazing content and experiment with new marketing tactics to grow our businesses.

Do you despair with the complexity that surrounds you? What have you done to make things simpler for your customers? If you had to come up with three words to describe your approach to business success what would they be? Please share your thoughts by leaving a comment below. 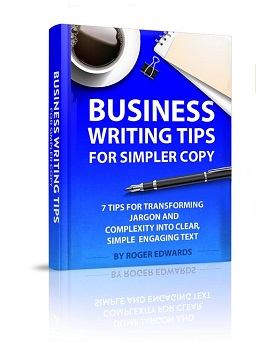